The Dutch governmental plan for the adoption of OpenDocument Format in national government by April 2008 has been discussed in parliament on Wednesday 12th of December. Despite, or maybe thanks to, Microsoft’s heavy lobby against the action plan, all major political parties voted in favour of the plan. The news starts circulating around the world, as can be read on Slashdot and Macworld.

The actionplan (1,2)for Open Standards is initiated by the Statesecretaries of Economical Affairs, Mr. Frank Heemskerk, and of the Ministry of the Interior, Mrs. Ankie Bijleveldt. 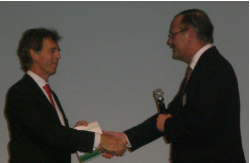 The in October launched OpenDoc Society, co-founded by the Free Knowledge Institute, is one of the groups behind the plan. The Director-General of the Ministry of Economical Affairs, Mr. Mark Frequin presented various action lines the Ministry is going to work on to facilitate the adoption of ODF. Mr. Janwillem Broekema, programme manager of OSOSS, hands over the first edition of the guide book “Acquiring (Open Source) Software” at the OSOSS Symposium.