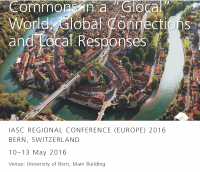 Last week I had the pleasure to participate in the Regional European Conference in Bern, Switzerland, organised by the International Association of the Commons, the IASC. The main theme was “GLOBAL CONNECTIONS AND LOCAL RESPONSES”, an adequate theme for many of the social movements and commons initiatives around the world. The natural resource and social commons were strongly represented, but some of the keynotes and sessions also pointed to the knowledge commons and digital commons.

As Silke Helfrich said it in her keynote: let’s not forget that commons are social constructions. “Each commons is one of a kind, and yet, there are commonalities:

This reminded me of the efforts to work towards convergenc of the different commons movements, as Silke (together with David Bollier and Michel Bauwens) had given a strong impulse with the organisation of the International Commons Conference (2010) and the Economies of the Commons Conference (2013) both in Berlin. Afterwards, Silke and David wrote the book “Patterns of Commoning“.

During the Friday lunch break Raymond Taudin Chabot presented his documentary on the commons called “Commons Sense” with interviews and many useful resources to raise awareness.

As part of the conference programme I had the pleasure to participate in one of the excursions. We visited an ecological farm forming part of a cooperative called SoliTerre. One of its members, Claudia Schreiber, presented their initiative (see slides). SoliTerre is a cooperative that integrates producers and consumers, of ecological food. SoliTerre has currently 9 farms participating that produce some 50 different food products for some 300 families. They have a yearly turnover of 300.000 Euro. Some of their most interesting aspects include: they negotiate not just price, but also production methods, sharing risks and commit to buying whatever the harvest is, given the other factors they agreed on, or they pay a farmer to take care of their chickens, paying for the time, land and food, in exchange for the eggs that they produce. Curiously (or not) the famers do their utmost best to avoid failed harvests, even if their sales are guaranteed. They have a reputation to loose, and will want to continue in the coop. To organise all this efficiently and effectively they needed some online tools, which they developed and made available as Free Software. Claudia ended her presentation that their initiative wouldn’t have been possible if it weren’t for the online tools. They crowdfunded the software tools and made them available as Free Software precisely to establish a digital commons, in order to have more initiatives contributing to the development and extension of it. The software is called OpenOlitor and here’s the website, demo site and github account with source code etc.

On Friday 13th of May we had our digital commons track. As convenor I had the pleasure to give a brief introduction on the rise of digital networks, the digital economy and situate the digital commons in relation to Free Knowledge and Free Technology (see my slides).

Going back to what Silke has said that morning about the parallel existence of commons. She is of course very right, but let’s look in some more detail. Let’s first see the defining criteria of a commons. Although the definitions of what is a commons varies, I have come to value the following criteria: it is a community organised resource system, that is 1) self-managed (i.e. we speak of commons governance), 2) its members have the right to participate, to use/acces its resources or services, to contribute to it and to fork/replicate, 3) there is a low threshold membership (otherwise it would refer to club goods).

The reader who’s familiar with Free Software and Free Knowledge can easily spot the resemblance of the rights in commons and those guaranteed in free licenses (to use, adapt/personalise, to copy/share and distribute modified versions). Without going into detail, I think these are fundamental commoners’ rights, for any commons.

But can we conclude from this that any Free Software is automatically a commons? I wouldn’t say so. If we look at the digital nature of Free Software, and a growing part of Free Knowledge and Free Technology in general, we can observe the particularities of digital goods. We can argue tht they have a near zero marginal cost, i.e. it costs only a tiny bit of energy to copy a digital bit. Take for example the sending of an email, the opening of a webpage (thus copying it to your local computer) or the sharing of files in a BitTorrent distributed filesharing network. The marginal cost is almost zero, so much so that we understand it is free of charge. This happens with abundant goods such as any digital file in a distributed network.

While current legislation (copyright and patents mostly) and our still dominant culture of hoarding/hiding knowledge make these digital bits privatised by default (exclusive rights granted by copyright to the author), we also dispose over the tools of copyleft and free licensing to avoid these privatisations of knowledge. Then that provides the basis for building digital commons: where we can share the tools and knowledge between all members (and also with non-members) without relevant costs (of replicating digital information). Where there is costs is first of all on the level of energy and material resources: the computers, networks and energy bills are seriously material. Human efforts are less relevant for the digital replication, but they are of course there when constructing and maintaining digital goods and infrastructures.

In our Digital Commons panel, Guifi.net presented their succesful model of sharing such costs between the users of the network. In fact they built a community broadband network with 30.000+ families, companies and public administrations adding their little pieces of network infrastructure to an ever growing network. They have defined their main rules in a “license”, which they call the Free, Open, Neutral Network license. Interestingly, they have implemented all of Ostrom’s design principles for the successfull management of a commons into their network. For details here is the presentation by Roger Baig and Leandro Navarro.

More in the material side goes eReuse, a network with Free Software based tools and openly shared processes (and open data) for efficiently preparing computer devices for reuse. Anyone can join their network and become an operator (earning money by running the eReuse processes), or become a user of computers that are maintained by the network, and as user one pays a tiny cost for maintaining the network. David Franquesa even suggests that the computers can become a common pool resource. In fact they already formed an initial ecosystem of actors participating in the Catalan eReuse network (see Digital Commons Community. They use a license defining the rules to form and maintain their commons and actors willing to join sign an agreement like this one.

My second intervention was about the convergence of bits and atoms, and how Digital DIY is rapidly offering new opportunities for producing our material needs ourselves. It is right there in the context of global connections (and knowledge sharing) and local production of personalised, adapted goods to the local context. This brings tons of changes and challenges with it. We study that in the European research project called Digital DIY. Furthermore I painted some directions for how we can build commons-based (or inverse) infrastructures, that reverse the supply chain from top-down to bottom-up. Consumer cooperatives, group buying, crowdfunding, etc. See here my slides.

Marco Berlinguer presented the P2Pvalue project and his reflections on values regimes that strengthen the digital commons. When marginal costs go down to zero, the market economy doesn’t work properly anymore. In the digital world capitalism continues to privatise knowledge and thus extract the wealth of what peers produce. Measuring value through market exchange is not relevant any longer, be it in the context of digital commons or in private platforms (of web 2.0, platform capitalism etc). Facebook likes, Twitter retweets, Google Page Rank are a few examples of new indicators of value. However they are all private and centralised. See for more Marco’s slides.

Unfortunately we had only short time to enter into discussion about these important topics. It has been an interesting encounter in any case, as always very worthwhile to meet up with different commoners and learn from each other. Without the digital commons this sort of encounters would however be impossible to organise. Let us hope that the non-digital commoners learn more about the digital commons and have a more critical view of the privatisation of knowledge and the digital domain 😉