Over the last three decades we have seen how collaborative production in software development communities has made available all sorts of software under non-exclusive conditions, as Free Software, or Open Source. Certain trends suggest that in the coming years we may see something similar in the production of physical goods. Well, tangible goods are of course different from intangible goods such as software. We can’t download hardware as we can software. But we can certainly download the CAD design files needed to manufacture the hardware. In hacklabs, FabLabs and community workshops, or even at home, people are building their own machines, ever more sophisticated while sharing the innovations through global communities.

Some claim these machines and products are not as good as their commercial versions from large manufacturing firms and DIY should be seen as limited to hobbyists and amateurs. And though this may still in part be the case, already serious products are being produced and, what is more, we can start to appreciate the potential this has for new forms of production, the local economy, and sustainability for the near future.

It is my wish to learn about this exciting field of hardware and manufacturing outside of the stranglehold of the big corporations, and inside the communities of open development and peer production. In this first post I’ll summarise what I have found so far as the main features of free/libre/open hardware. This is just the start. In the study process, that I document on the new Microfactoria Blog, I intent to build up a library of cases and (hopefully) useful information, which I share with you here. You’re more than welcome to follow me, comment or contribute otherwise. To start, let’s begin with a quick overview: which are the terms used, forms of protection of the developer communities and some of the more successful machines that you can build yourself, spaces where people share, exchange, learn and experiment.

Many people have proposed different terms and different definitions. First of all, we should distinguish hardware from hardware design, and between openness and freedom. Here go a few of the definitions.

“Open Source Hardware” refers to computer hardware for which all the design information is made available to the general public. The term open source corresponds directly to programmatic source code, which holds true for hardware designs described in hardware description language (HDL), but not for designs that may be described only in computer-aided design (CAD) drawings, as noted at IBM‘s Open Hardware page.

As the definitions of Open Hardware and Open Source Hardware don’t guarantee all uses people can make of it (for example to make derivative, adapted version, and sell these), terms which relate to freedom are also in use (the same debates that take place in the Free Software movement regarding free/libre and open source software can also be detected in the hardware counterpart, see here a summary).

When trying to apply the concepts behind Free Software to hardware, according to the founder of the Free Software movement and president of the FSF, Richard Stallman, (he wrote in 1999), “”free hardware” means hardware that users are free to copy and modify; a ”free hardware design” means a design that users are free to copy, modify, and convert into hardware”.

Recently at the Open Hardware Summit a strong definition for Open Source Hardware has been defined as hardware whose design is made publicly available so that anyone can study, modify, distribute, make, and sell the design or hardware based on that design. This definition provides the four freedoms included in Free Hardware Design.

The OHANDA label for “Open Source Hardware” interestingly refers directly to the Four Freedoms from the Free Software Definition that lay the foundation for sharing hardware through OHANDA. Any kind of physical device with an OHANDA label guarantees:

Also insightful can be Patrick McNamara‘s definition of 4 possible levels of openness in Open Hardware projects: 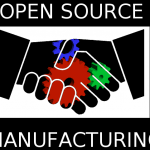 All previous concepts can be seen as part of an emerging open design movement. “Open design” is the development of physical products, machines and systems through use of publicly shared design information, according to Wikipedia. Or as the application of open source methods to the creation of physical products, machines and systems (according to the P2P Foundation).

As hardware is generally not so much restricted by copyright as it is by patent law, copyleft protection has only limited use to protect the community from undesired private appropriation. Still a few copyright based licenses exist:

Another form of protection can be derived from trademarks. That’s what the OHANDA label aims for. OHANDA labels work like this: a label in the sense of a trademark will connect the 4 Freedoms with any kind of physical device through OHANDA. The label is comparable to other common certificates such as the FCC or CE marks.

Some initial forms of Free Hardware

Various Free and Open Hardware projects have started years ago. Well known projects include OpenSPARC, OpenMoko and Arduino in the area of computers and mobile phones. In the upcoming field of digital fabrication, we have seen the concept of FabLabs as open design centres initially built with proprietary and still expensive machinery. The advent of the free hardware 3D printers like the RepRap has brought down costs radically. FabLabs, hackerspaces and community workshops have thus become more affordable and enable people to get involved in the movement.

OpenSPARC is an open-source hardware project started in December 2005. The initial contribution to the project was Sun Microsystems’ register-transfer level (RTL) Verilog code for a full 64-bit, 32-thread microprocessor, the UltraSPARC T1 processor. On 21 March 2006, Sun released the source code to the T1 IP core under the GNU General Public License. (see Wikipedia:OpenSparc)

Openmoko is a project to create a family of open source mobile phones, including the hardware specification and the operating system.[1] The project was sponsored by Openmoko Inc. (Wikipedia:Openmoko) 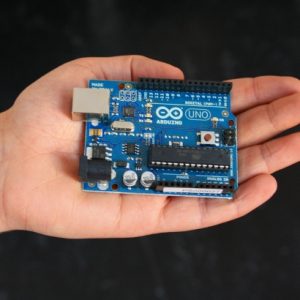 Arduino is arguably the most popular Free Hardware project: an open-source electronics prototyping platform based on flexible, easy-to-use hardware and software; many versions of the Arduino hardware have been commercially produced to date. It’s intended for artists, designers, hobbyists, and anyone interested in creating interactive objects or environments. You can read a comprehensive introduction to Arduino on Wikipedia or in Alicia Gibbs thesis (PDF).
Most of Arduino’s official boards are manufactured by SmartProjects in Italy. The Arduino Pro, Pro Mini, and LilyPad are manufactured by SparkFun Electronics (USA). The Arduino Nano is manufactured by Gravitech (USA).
By 2006, Arduino had sold 5,000 units; in 2007, it sold 30,000; in 2009, Arduino was reported being on track to sell at least 60,000 of the microcontrollers. (source: YouCoop:OpenHardware)

Digital fabrication is a new kind of industry that uses computer-controlled tools to turn digital designs into useful physical objects. Advantages of digital fabrication (as listed here GVCS): it is flexible, decentralised, cheap, customisable, it empowers the poor and it is evolving. FabLabs are small-scale workshops for (personal) digital fabrication. They’re generally equipped with an array of flexible computer controlled tools that cover several different length scales and various materials, with the aim to make “almost anything” (Gershenfeld 2005[3]). A fully equipped FabLab could costs as little as 20-50.000 US$ (Menichinelli). The initial idea for a FabLab was to set it up with off-the-shelf materials and machines, already much cheaper than the conventional digital fabbers. However a next cost reduction is being made by sharing the designs for the machines. When using the opensource Fab@Home printer, a cost level of 3000$ can be reached. 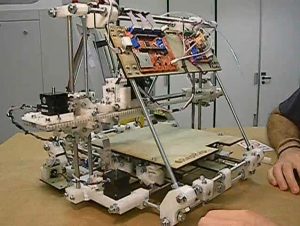 RepRap is a free desktop 3D printer capable of printing plastic objects. Since many parts of RepRap are made from plastic and RepRap can print those parts, RepRap is – at least in part – a self-replicating machine, one that anyone can build given time and materials. It also means that – if you’ve got a RepRap – you can print lots of useful stuff, and you can print the parts for another RepRap for a friend…

We have had a quick introduction into the field of Open Design and Free Hardware. According to most definitions that have been proposed, both Open and Free Hardware build upon the four freedoms which define Free Software. In the domain of hardware, copyright protection has only limited use, nevertheless this can be a way of protecting the designs, software and documentation that go into the manufacturing process. OHANDA adds to that a label based on trademark rights and its brand assures a labelled hardware project complies with the four freedoms.

Free Hardware projects in the area of computer processors and boards may be the more famous ones, like Arduino. Nevertheless it is the area of digital fabrication which has presented a leap in imagining the reach of free knowledge based collaboration. 3D Printers like RepRap can build the parts for replicating itself for less than 500 Euros in material costs. This brings printing real material objects within reach of many schools, community spaces, or home workshops. And more versatile printers and machines are under development. As Chris Anderson describes In the Next Industrial Revolution, Atoms Are the New Bits the crowdsourced, open design of cars is already happening (note the differences between crowdsourcing and crowdfunding).

Michel Bauwens from the P2P Foundation narrates how the emergence of open design and open manufacturing will pave the way for peer production in the physical realm. Describing the process of peer production, he distinguishes free raw materials from existing free knowledge and voluntary contributions at the input side, then a process of modular tasks based on inclusivity and peer validation. At the output side “it creates a commons, using licenses that insure that the resulting value is available to all, again without requiring permission. This common output in turn recreates a new layer of open and free material that can be used for a next iteration.” (WE)

Kevin Carson goes even further in The Homebrew Industrial Revolution when envisioning a a society where networks of microenterprises work together globally to produce locally. He observes how the avoidance of any artificial scarcity rents (such as patents and market dominance) allows people to organise in alternative local economies with much less need for capital and the money economy as we know it.

We may conclude that hardware may have an even more disruptive potential for change for our societies than has had software, when freed from artificial restrictions of collaboration and operating as commons-based peer production networks. Especially when such hardware projects become economic engines of themselves and provide economic opportunities for its developers and community. It was the difference between free as in freedom and free as in beer that has enabled free software developers to charge money for their services. This in turn has allowed the emergence of sustainable ecosystems around these projects. It is this potential to work within the old system that shall allow the new system to thrive and maybe one day make the old one obsolete.