This summer, most of the Free Knowledge Institute team took part in OpenCoop 2018 (see videos from the gathering).

The vision behind the conference is “of a world in which people and planet come before profit”, of a “generative economy supporting a world of abundance in which common resources are ethically and equitably stewarded for the benefit of all” through “creating new organisations which are member owned and democratically governed so that we, the people, have control over the institutions we rely on”. The present edition focused on creating a framework for deeper collaboration within cooperative initiatives to take advantage of the network effect and, together, forge a path to a collaborative, sustainable economy. 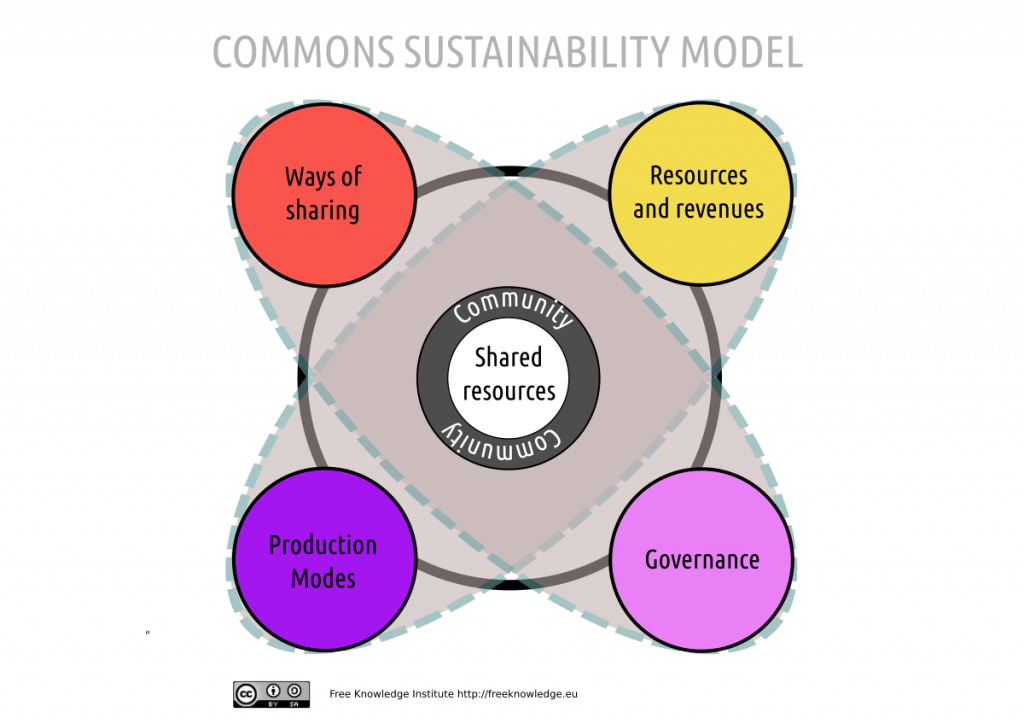 We presented the Five Pillars Model for the Sustainability of the Commons Economy, designed to prototype new sustainable projects or transform already existing ones and analyse why certain commons initiatives are sustainable or not. We explained how the model is guiding us in creating some of the projects in wich we participate such as La Comunificadora, the Game of the Commons Economy, Teixidora.net, CommonsCloud or the cooperative femProcomuns. And found (as expected) many friends and colleagues developing similar projects and preoccupied with similar issues. Exchanges were enriching and enlightening, and we’d like to share some of them here.

Find here the videos of the sessions in which we took part:

We have now run two editions of the Platform Cooperativism workshops with six modules and La Comunificadora. We are about to run the third edition of the Commons Collaborative Economy Programme, La Comunificadora. It is a support programme by Barcelona Activa of the Barcelona city council to help promote a change in the direction of the collaborative economy by returning it to the commons production, through the distribution of the generated value and an shared governance.

We found other inspiring support programmes and we are working on establishing relationships with their teams, and exchanging experiences and knowledge. 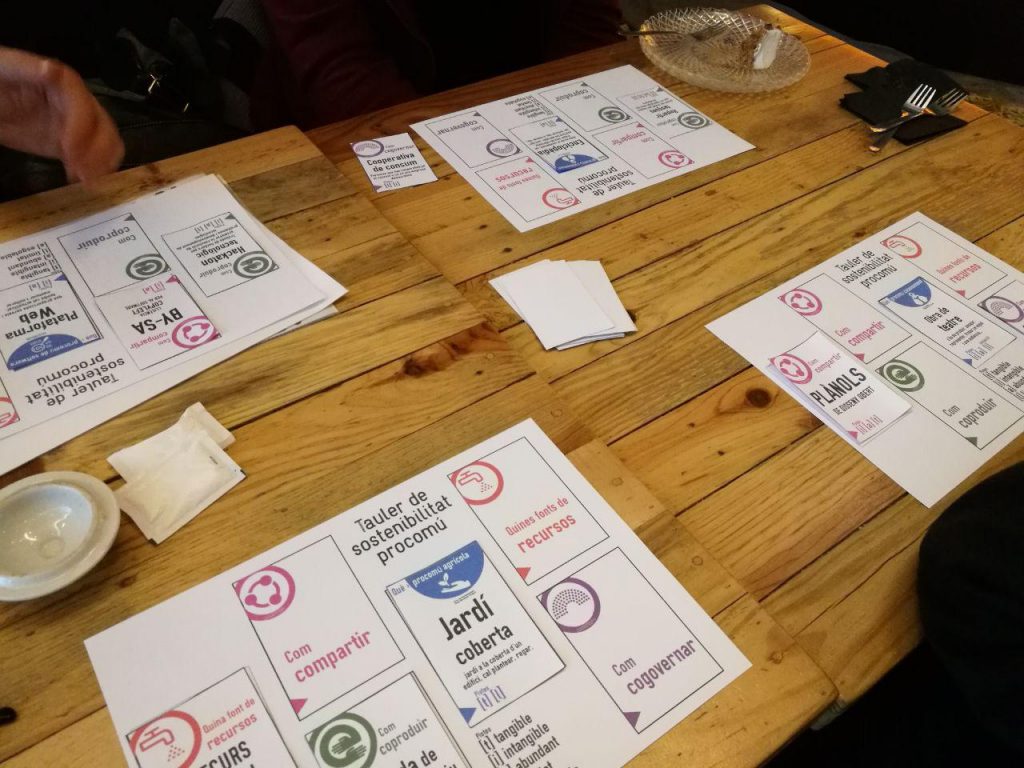 We presented the new Game of the Economy of the Commons, a card game that allows to understand, in a playful way, the dynamics of this economy which puts the focus on the “sharing” instead of in the transaction and profit-making. The goal of the game is for all resources to be sustainable, so no player can win on its own. And explained the new methodology and toolkit for “trying on the commons dress” to see if the “Commons” dress fits your project. When prototyping a project, individuals play the role of at least three different personas, which can respond to the different role in the governance of the project, or the different stakeholders,and the group collectively defines which will be its role in each pillar.

Many other colleagues had developed playful games and toolkits: 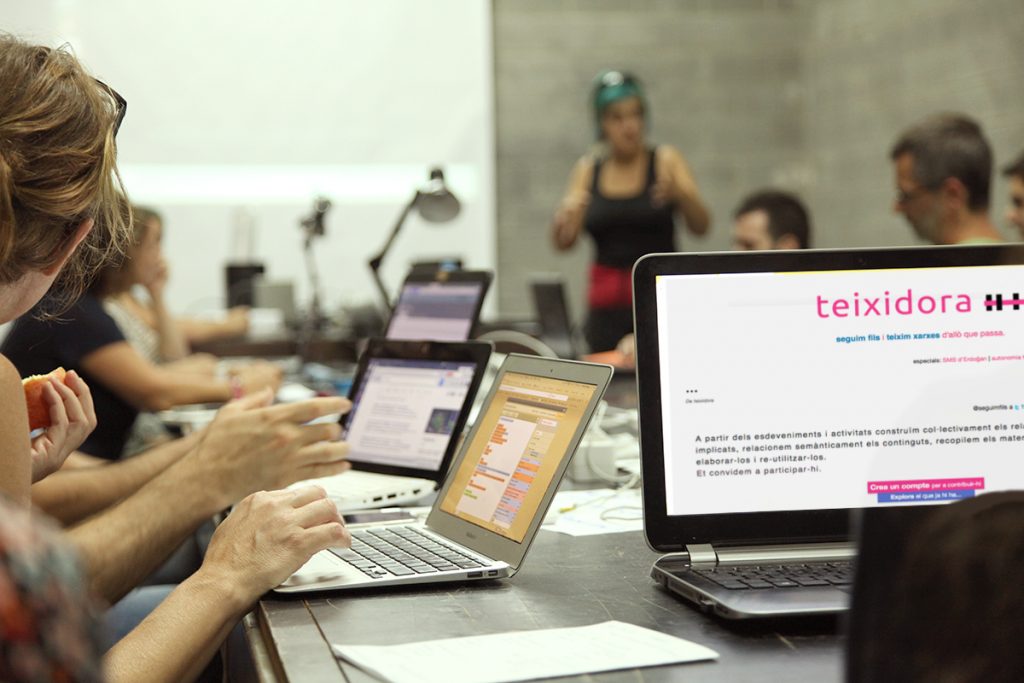 We have developed and are using Teixidora.net a digital platform for collaborative live-writing in community events and a mapping tool. It connects distributed knowledge generated by communities of practice, basically by collectively identifying organizations, projects and subjects and taking notes, in chronological order or in a structured way and semantically. It helps produce collective narratives, follow what happens and weave relationships by sharing knowledge. It’s based on several applications and devices, which it appropriates and combines: 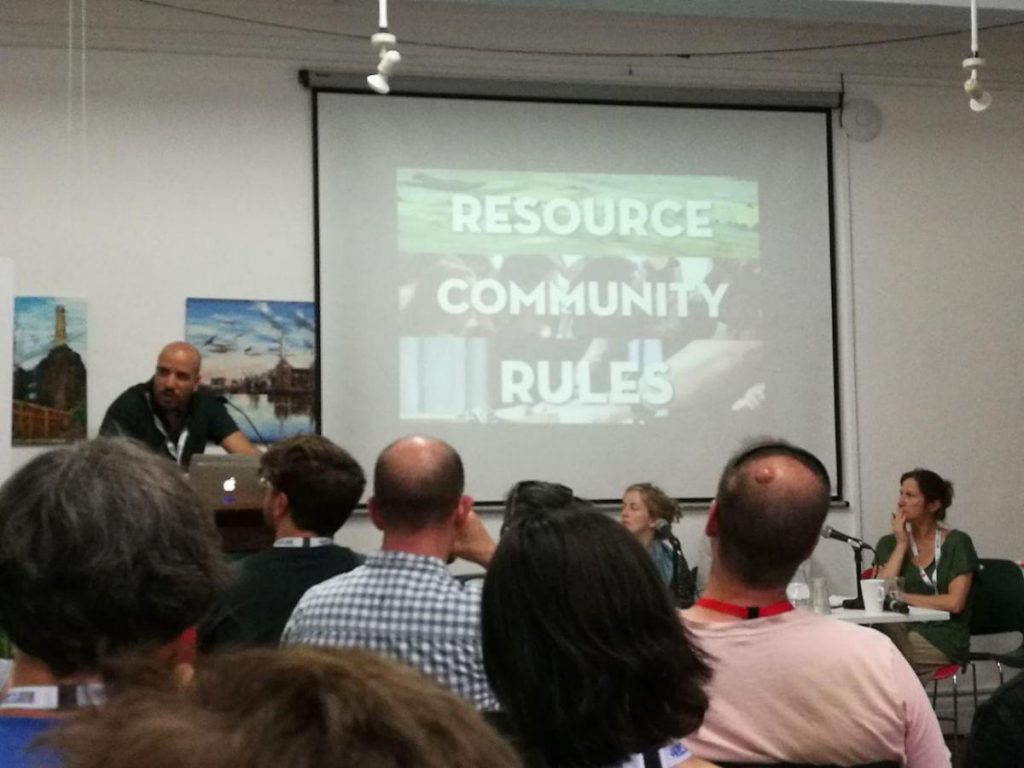 At the session and workshop on mapping the cooperative and solidarity economy, ontologies, multilingual, and interoperable maps were discussed. It seems that the session had high expectations to build a comprehensive directory, an index, a map, or to agree the format of a schema to enable us to map out all the organisations and networks within the collaborative / cooperative / solidarity / progressive economy. Participants highlighted existing initiatives with similar purpose, here is a short article by Coop News, mentioning some of these initiatives:

We thought of work done in that event in Paris, last year, about the Media convergence of the Commons, with many colleagues working in the same lines , discussions started there could be reignited, and maybe included in the new working document.

As we have recently launched the CommonsCloud, as part of a wider alliance around the multi-stakeholders cooperativa femProcomuns and with the vision to build the local social basis that allows for sustainability while encouraging replication and interconnection with other similar cloud clusters, we had already connected with many participants to make the most out of these few days in London.

The team at Happy-dev.fr team (Alexandre, Sophie and Sylvain) talked about their soon to be launched cloud framework called Startin’Blox. It will allow local nodes to develop their own social network environments adhering to open web standards.

WebArchitects and the CoopTech UK network presented their cooperative cloud services, including Discourse and NextCloud that they set up for their members and external customers, complemented with custom development and hosting activities. We found their solution to give tools for organisation servers similar with the one that Maadix offers in Spain, however the tools that WebArchitects integrate are quite similar to the ones we use in CommonsCloud, and we have a lot to share with them.

Together we explored the main challenges and ways to work together between the different cloud initiatives and are continuing the discussion at the Loomio group Open App Ecosystems.

Together with a few like minded colleagues and initiatives, we cofounded femProcomuns a multi-stakeholder and nonprofit cooperative for commoners to overcome legal, economic and management hurdles to develop our projects. We work on the convergence between the Social and Solidarity Economy and the Commons Economy, bringing user and/or consumer members together with worker and/or producers. It was set up in Barcelona in 2017 and we have started economic activity in 2018. 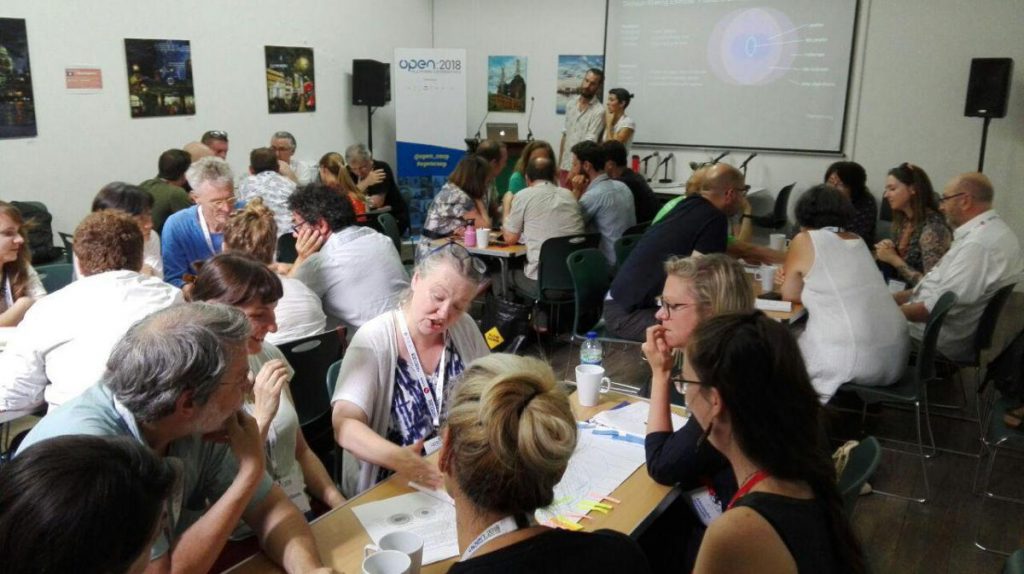 Also spoke to the team at Cooby.io, as they are working on the development of Odoo as a cloud service for organisations to have a low cost ERP solution, very similar to what we’re working on with the Odoo*Coop Alliance around femProcomuns.

We found out about Cobudget.co, the co-budgeting platform from Enspiral used by Ouishare France to allow teams to collectively decide on budgets, contribute to it, assign buckets to certain activities or persons, etc and we are currently testing it!

We’d like to see the event using free and open tools. The event organisers had it setup for all to use Google drive documents to take notes, Powerpoint for presentations and Sli.do for real time engagement with the audience and vote questions and ideas.

There are free software alternatives to be considered. We like using collaborative note taking pads, as we do in most events and meetings, automatically gathering, crossing and mixing knowledge on Teixidora.net. And we haven’t found a «free software slido» tool, if anyone knows one, adding it to Teixidora could be a combination 🙂

An excellent gathering, Thanks for having us!!

All in all an excellent gathering for which we are very thankful to the Open.Coop team and all contributors. We celebrate the collective effort towards free knowledge, digital commons, an open cooperativism and decentralised networks to effectively limit power concentration, and we encourage organisers and participants to continue to build on the work done until now!!

Other reports from Open 2018

if you know of any other reports we should link from here, in order to share more about this great conference, please let us know!)