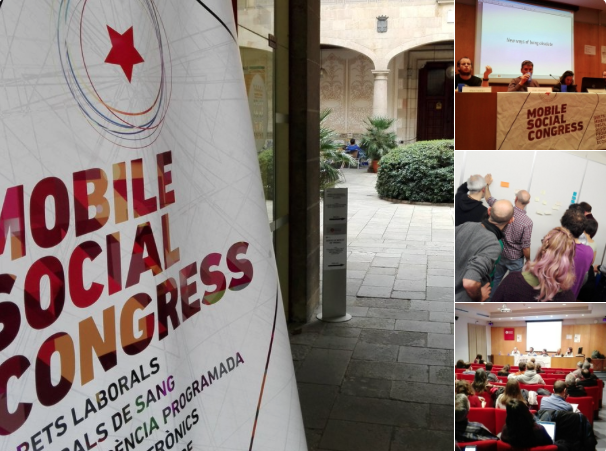 This year, the Mobile World Congress (MWC17) and its associated activities (MWB, 4YFN, Yomo) took place in Barcelona between 22 February and 4 March. For a few days, the city is taken over by large telecommunications corporations, which use it to showcase their products as marvels of technological progress. However, since 2016, every year during the MWC, several congresses and activities, for example AntiMWC, Mobile Social Congress and SobTec have challenged this narrative, presenting alternative ways of producing technologies. The city becomes a hub for new products and confrontation of ideas around the mobile and digital technologies.

Free Knowledge Institute took part in the Mobile Social Congress ; with a workshop with the research group Dimmons (UOC), ), to explore sustainability models for free apps; moderating a panel session with Barcelona Free Software, “Autonomy and Technology, Regaining Control Over Information“; and promoting collective documentation of the congress, with Teixidora.net.

The Mobile Social Congress (MSC17) was co-ordinated by Setem Catalunya together with an alliance of entities. The main issues considered were oligarchic control by a few companies, dependence on mega-platforms, obsolescence, effects on the environment, loss of jobs and, above all, technological sovereignty.

These are all issues that concern the Free Knowledge Institute, which promotes alternatives, works to recover social control, and supports a commons collaborative economy. The FKI promotes replicable, participatory and democratic community projects, like the projects developed in La Comunificadora, the support programme recently produced with Barcelona Activa. 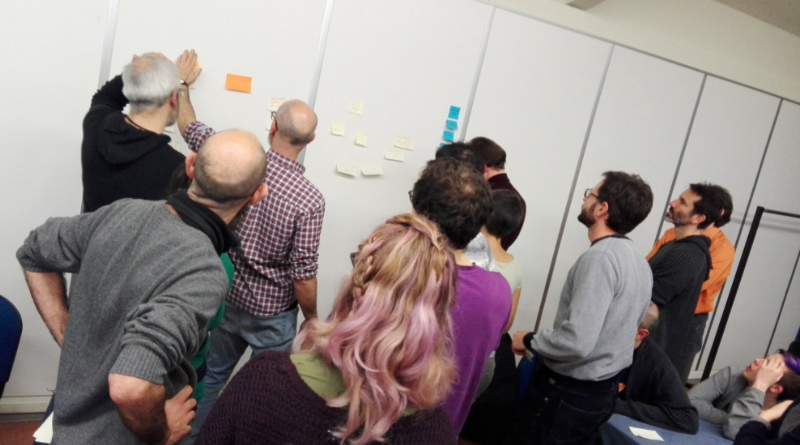 Accordingly, FKI (David Gómez and Wouter Tebbens) and Dimmons (Enric Senabre, Mayo Fuster, Elisabet Roselló), conducted a workshop on models for the commons and free apps. They asked what applications we need in what we usually call “the cloud”, what doubts arise about their viability when they are free and managed as commons, and what similar alternatives we know. Participants wrote the answers on postits and then discussed them. Notes of the discussion were taken on a pad. The needs identified were, among others, storage and sharing of files, and office, cartographic, communication and network collaboration applications. Severalinteresting projects like Framasoft, Sandstorm and Cloudron were also identified. Some doubts arose, such as how to make services sustainable, the difficulties of countering business services that are apparently offered for free, or the role that artificial intelligence may have, and how to make this technology common.

The FKI hosts an international working group called CommonsCloud which investigates and shares knowledge about the state of the art on free and self-managed cloud platforms and is building a local alliance in Barcelona to launch a first version of this cloud.2. 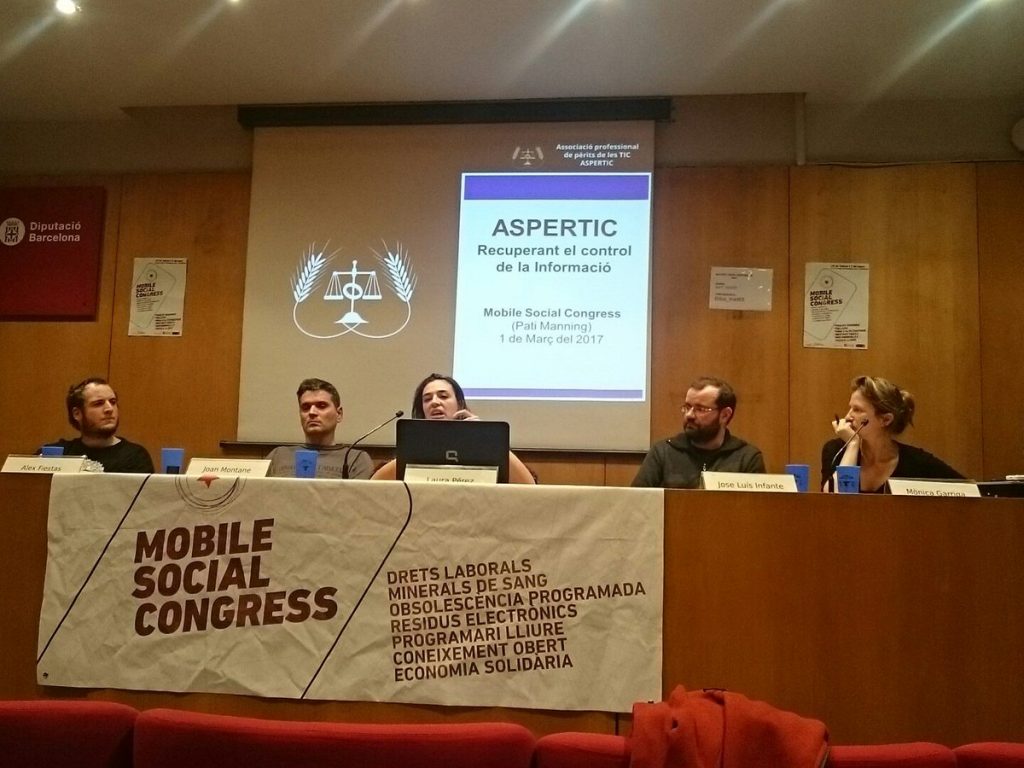 (FKI) at the invitation of Barcelona Free Software moderated a session exploring some of the alternatives for “Recovering Technological Autonomy and Control Over Our Information” through the use of free software that allows exercise of all four Freedoms in relation to technologies (FSF)..

Àlex Fiestas, from Barcelona Free Software and KDE España contextualized the talk. He described the concept of programmed obsolescence in software, which, through discontinuity in software support, disables devices that work perfectly, creating artificial needs and actively preventing consumers from generating alternatives themselves. He also spoke about the inability of the European Union to produce its own hardware, creating dependency similar to that which it had in aeronautics before creating Airbus.

Jose Luis Infante, member of Llefia.net and the Comunitat Catalana d’OpenStreetMap (OSM), explained how applications can be made using cartographic data (ODL), the importance of citizen contributions with local knowledge, and also the relevance of public administration with regard to transfers of geolocated open data to enrich the map.

Joan Montané, member of Softcatalà, described how Softcatalà and other minority language translation groups work, with freedom of software, adapting software to their own languages. The groups begin by creating linguistic resources (translator, proof reader, dictionaries) and continue with translation (guides and translation memory) before proceeding with the basic kit: browser, office package and graphic editor. From desktop applications softcatalà has expanded its activity into the realm of mobile and the devices of the Internet of Things, which soon will face the challenge of voice recognition.

Laura Pérez, a lawyer for new technologies, transparency and anti-corruption, spoke about the weakness of computer security in Catalunya and Spain, how scams and cybercrime can be carried out, and how to penalize infringements in accordance with the Spanish Penal Code, 2015. She warned about applications and web services aiming to extract personal 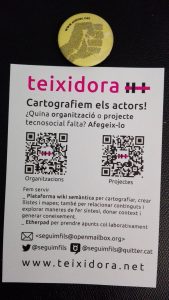 MSC17 talks were included in Teixidora.net, , the platform designed to follow the threads of communities and technosocial events, encouraging the taking of collective notes and mapping of projects and actors mentioned to encourage discussion and weave a choral narrative. Teixidora also attended the II Congress of Technological Sovereignty (SobTec), co-documenting more than a dozen sessions.

The work of weaving networks on MWC 2017 and the alternative meetings is still ongoing at the Teixidora Work Page, with the aim to improve documentation, stakeholder mapping, and content processing in order to identify the debates now taking place and proposals coming out of it. You are invited to participate!