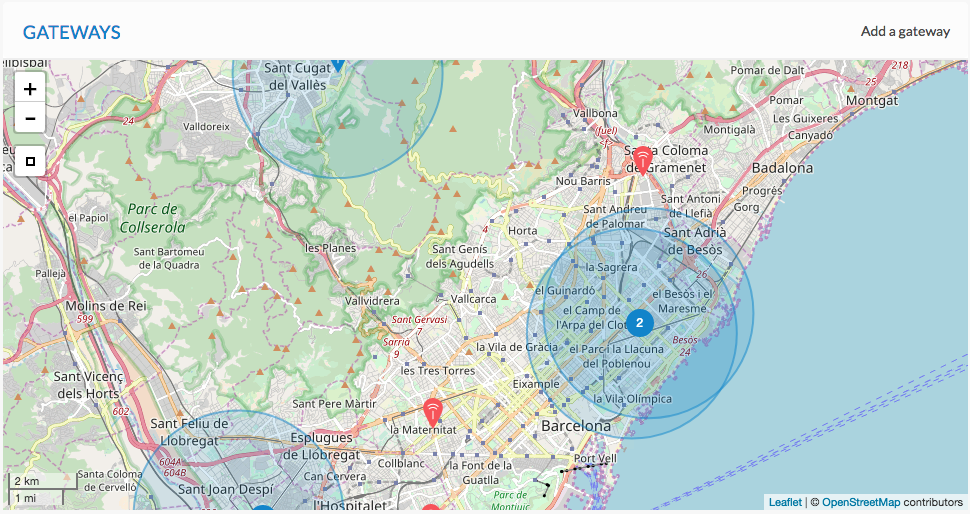 At FKI for long we have been asking ourselves how can we construct smart cities connecting sensors and actuators to the net in such a way that we advance towards technological sovereignty and social autonomy.

We are aware that the Internet of Things can have an important impact and can imply the loss of privacy and autonomy, but we focus on the tremendous opportunities it brings to improving the social wellbeing of all. That’s why we are working with the community to build a global Internet of Things.

In the summer of 2015 a group of citizens in Amsterdam placed 10 antennas of a new free radio frequency technology (LoRa) to cover the city with a data network that could be used free of charge (The Things Network, TTN). TTN uses the LoRaWAN radio frequency protocol that stands for long range (up to 15 km), low consumption of energy and data. This technology allows things to communicate between them through the Internet without the need for 3G or WiFi, so no wifi access codes, nor mobile subscriptions need to be paid, nor is a connection to the energy grid or frequent charging of batteries needed.

Soon after the first network started in Amsterdam, we wanted to join this effort and started setting up a local community in Barcelona and with others we initiated TTNcat in Catalonia. The TTN model is being replicated around the world and now we are a global community of more than 30.000 people, with more than 2.600 antennas in more than 500 cities. In Catalonia we are in Barcelona, Mataró, Girona, Granolers and Cornellà and we know have friends in Andorra!

With TTNcat we wanted to go a little bit further and create a fully free, open and neutral community network for the Internet of Things, in collaboration with the Catalan community network Guifi.net. Together we want to create practical usecases that form the basis of a bottom-up constructed smart city, that is open access, replicable and self-governed by its community (as a commons). With this idea we requested support from the municipality which was granted recently. Now with the support from the Barcelona City Council we are giving birth to the Open Network for the Internet of Things, possibly the first that is fully open, commons-based and self-governed.

The first antennas and gateways are being installed in the city with the objective to cover all districts of Barcelona. The aim of the project is to empower social organisations so they can use open and replicable technologies that are created in the network, with open business models, that generate open data and under commons governance models (Data Commons) in particular for the monitoring of pollution and energy consumption. Ultimately to foster shared knowledge in the community; promoting the use of Open Source Hardware and Free Software, and where possible, manufactured locally.

That’s why in the ten months programme two hackatons will be organised, 25 technical and social workshops targeted at citizens and social organisations and professionals of the tech and free knowledge sector, where a train-the-trainer methodology will be used to grow the database of qualified TTN trainers and allow others to replicate. The whole programme will combine reflections of possible uses of the technology and social consequences with different levels of technological mastering.

Guifi.net is a bottom-up, citizenship-driven technological, social and economic project with the objective of creating a free, open and neutral telecommunications network based on a commons model. The development of this common-pool infrastructure eases the access to quality, fair-priced telecommunications in general and broadband Internet connections in particular, for everybody. Moreover, it generates a model for collaborative economic activity based on proximity and sustainability.