Last week (6-7 June 2013) the European Commission’s Joint Research Centre, the Institute for Prospective Technological Studies (JRC-IPTS), convened 20 experts to develop Open Education visions for Higher Education in 2030 and a roadmap to get to the more desirable outcomes. They also invited several heads of unit from DG’s of Education and Culture and R&D from the Commission. When I received the invitation to participate, I could of course not resist and try to present the ideas and experiences we have been generating over the last years within the Free Knowledge Institute, the Free Technology Academy and the commons movement.

This workshop was the third and last of their consultation round; previously workshops had been organised about school education and about lifelong learning (LLL). The OpenEducation 2030 consultation is done by the JRC-IPTS on request by the DG EAC. Here follows a subset of ideas that we discussed; for brevity I will focus on the parts I brought forward or found most interesting.

The workshop was led by Christine Redecker and Yves Punie from JRC-IPTS. After a presentation session about the context of open education and research on behalf of Ana Carla Pereira, Georgi Dimitrov and Jean-Claude Burgelman from the Commission, we had to form groups. We formed five groups to discuss the most important and difficult challenges in the areas of 1) governance & funding; 2) educational resources; 3) learning & teaching; 4) research; and 5) assessment & certification.

Some of the ideas and challenges that came forward during the plenary reporting session showed that many aspects are transversal. The way an educational institute is organised – central hierarchy vs. bottom-up community – has serious implications for funding, for how learning may take place, etc. In the area of assessment and certification we have an important challenge to recognise skills acquired elsewhere, for example in peer production communities. Informal learning is one of the biggest challenges for the educational system as a growing group of people are nowadays already acquiring the most interesting learning experiences in such communities. Either Higher Education adapts to that or it’ll face the threat to become ignored and obsolete. MOOCs have risen over the last five years, since George Siemens and Stephen Downes started their massive open online course. Now we may disagree about the importance MOOCs will have in the future of HE, but it can’t hardly be disputed that they will have a stronger role than today and we can expect MOOCs to provide a coniserable amount of free/open or just gratis resources available on the net.

Many people mentioned “user-driven”, “needs-driven”, “demand driven” instead of the old “push” model. And I think demand-driven is indeed the way to go, but at the same I think we must be careful with the threat of corporate control. What matters here is to go all the way: a bottom-up redesign of the whole organisation. That leads us to a commons based model, where all participants can participate in the governance of the educational initiative, one person one vote. Educational resources will be peer produced and learners can easily provide feedback and contribute to the production and improvement, following the SER-model (Seeding-Enhancing-Reseeding, De Paula, as we implemented in the openSE project). If Research is thought of as bottom-up, it will be organised by the people that need it for their personal or collective needs. Learning, Education and Research will then become a more disperse continuum. Crowdfunding maybe needed in combination with some public funding.

Many participants had ideas about “open badges”, “microcredentials” and more flexible, adaptive accreditation systems. My idea would be to use the contributions people are making in many online communities and infer useful information about what people did and add that to their personal portfolio. Complex learning & reputation metrics can assist people to assess those contribution-based metrics. In the SELF project (Science, Education & Learning in Freedom) we designed a prototype of such metrics for a collaborative peer production platform for educational resources. I can imagine that in the coming decades we will be able to build much better and more complex algorithms that can help us find people with specific interests, skills and experience to match them for a particular project or need. Meanwhile, the educational system should indeed work on a much more flexible recognition of competences obtained outside the formal educational system. Participants agreed that universities and educational institutes in general need to change and reinvent themselves if they want to survive and this is definitely an important part of it. 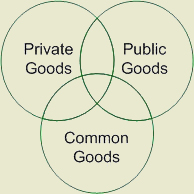 I brought forward the issue of ownership and control. And the importance of the commons. While a few people used the term “commons”, still the dominant vision was the dichotomy public/private and public-private partnerships. Even though the participants all had a certain background in the “open education” movement and most considered OER/OEP and OER based MOOcs as an important element of the future. Still the growing relevance of commons-governance has not reached most. Just as an illustration: all of us agree about the importance of Wikipedia as a source for learning. But let’s reflect for a second about the implications of the Wikipedia model. It was in 2012 that Encyclopedia Britanica stopped the presses and that Wikipedia has won much “marketshare” (or better: “mindshare”). This means that the model of commons-governance and peer production has become hegemonic at least in the domain of encyclopedias. It also means an exodus of the market towards the commons. This phenomenon has happened in the domain of software before and is happening in every area of knowledge. It has far reaching consequences on our socio-economic model (see my perspectives of the commons for industrial production).

For time sake in this workshop only some trends in open education and science were pointed out (very well done btw by Jean Claude Burgelman), but maybe it would have been good to put the current multiple crises and transition into context. Recently I participated in the Economy of the Commons Conference in Berlin, which did provide such critical context. Here’s an excerpt: “A rich array of commons – in nature, cities, civic life, the Internet, and many other realms – are showing that commons can provide stable, equitable and ecologically benign alternatives to conventional markets. The Economics and the Commons Conference (ECC) will expand and empower this work by exploring the commons as a coherent field of inquiry and action. It will convene approximately 240 commoners — researchers, practitioners and advocates from around the world — to explore the relationship of conventional economics and the commons, showcase key actors and initiatives, and devise plans for moving the commons paradigm forward.” 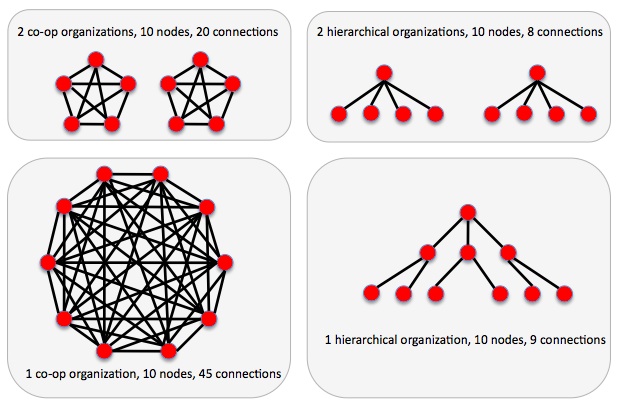 Let us for a moment consider the main differences between a bottom-up organised cooperative organisation and a central hierarchy. As you can see in the illustrartion, a central hierarchy has much less connections between the nodes (persons). This means the hierarchy has much less exchange of information and knowledge which logically results in slower and less efficient responses. The Internet has helped us become hyperconnected, which resembles much more the bottom-up cooperative organisations, where decisions are taken on a more participatory way. More on this can be found in this excellent post: “what if everything ran like the Internet.”

In the workshop we formed groups to develop a scenario for 2030. Two groups worked on conservative scenarios, and one on a more “radical” scenario, this last one being of course the one I participated in. Our group included Georgi Dimitrov (DG EAC), Hanna Shapiro (Head of Centre Policy and Busines Analysis Danish Technological Institute), Sophie Touzé (OCW EU/Université de Lyon), Jean-Claude Burgelman (Head of Unit DG RTD/EC), Jim Taylor (WikiEducator/OERu), Darco Jansen (programme manager EADTU), James Mazoué (Director Ofice of Online Programs, Wayne State University), Bastian Hamann (Hertie School of Governance), Hrissi Karapanagioti (University of Patras). We agreed on the main aspects being a commons-based, bottom-up organised network of educational initiatives with a strong focus on transparency and free/libre/open knowledge resources. But there were various parts we didn’t reach consensus on yet. Let me sketch my version of the scenario we discussed.

Name of the scenario: University of the Commons / Bottom-Up Commons-governed Educational Network

Roadmap. In order to get the scenario off the ground, organisations will change and new ones will emerge, tools will need to be developed and improved; funding schemes and policies need to be adapted to move in this direction. In the years ahead some organisations will move in the direction of this vision and take the lead in certain areas. As the change is driven by (lead)users, we will see different kinds of actors taking a stronger role in education. Think hackerspaces and FabLabs for example.

The right tools will empower these bottom-up educational communities to strengthen their educational work while also helping existing actors to move in this direction. We can envision the tools needed as an application layer of the Internet. Like the foundations of the Internet, the layers are organised around open standard protocols and implemented in Free Software.  Here are a few of the relevant tools we need:

Although most of the change should be expected to come from bottom-up initiatives, several of the key tools of the roadmap could benefit from European funding. This provides unique opportunities for the European Union and a more sustainable model for higher education and our economy. It will help to select the right prototypes among the currently available, but experimental projects and initiatives and support these to spread. If we compare with the two conservative scenarios that have been sketched during the workshop, both were an extrapolation of the current status-quo (but more privatisation). The first one predicted an elite league of global top-universities, funded by private money and tuition fees. And the second one imagined a consortium of OER & MOOC initiatives, as public-private partnership. The implicit understanding was that with a lot of money they would be able to keep high quality levels and attract the best talents and rich people. However I doubt very much that large sums of money will be the key to build quality projects in a few decades from now. Already now the more interesting innovation is coming – at least in part – from commons-oriented peer production initiatives (cf. Wikipedia, Arduino, …). With the need for capital decreasing, research and education that directly matches the users’ values of equality, autonomy, privacy, solidarity is what I think will lead to the ultimate values of individual and collective freedom and sustainability. And that’s what we work for at the Free Knowledge Institute. I look forward to see how the future will look like 🙂