Local policies for the Smart City and Knowledge Society: Towards a more sustainable, social and democratic model.

In early 2016, the Barcelona City Council commissioned us to write a report to, “develop a strategic vision of the knowledge society that facilitates citizen empowerment through technology”. 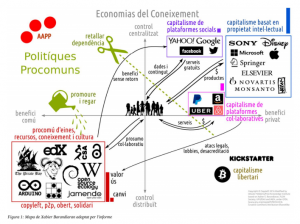 To this end, we prepared a report diagnosing the main problems, objectives and actions in the following areas: software, telecommunications networks, physical products (including the world of makers and open design, R&D centres, and waste and circular economy), collaborative consumption, and commerce, energy and mobility.

The report advocates the common good and citizen empowerment through technology and therefore, particularly takes into account projects related to free/open/common goods, and the collaborative, social and solidarity economy.

Who develops the technology? Who owns it? Who has access to its code and data? Who gives information away and who then owns it? Who defines the architecture of what is possible and what is not? In the field of digital technologies, the tension between collective production of value and its appropriation by a few companies is central. On the one hand, the original Internet design combined technical, organisational and cultural characteristics that decentralised power. This decentralisation has allowed great freedom of action and innovation. On the other hand, governments and markets have introduced elements of control and recentralisation of power, often appropriating what the networks of people had produced collaboratively. Obvious examples of this are platforms like Facebook, Google, Microsoft, Apple or Twitter.

Beyond the two traditional models of management (public and private), we need to recognise, promote and protect models of communal management that permits using, sharing and replicating all types of initiatives fitting into a model of citizens self-management, (including governments and companies), without relinquishing exclusive control. At present there is talk of inverse infrastructures, citizen management, social digital innovation and models of communal management or self-management. In the field of technologies there are a few outstanding references: free software (also known as open source), open standards, open/free/neutral telecommunication networks, open and free content, open design, open source hardware and circular economy, or open data.

In this sense, Christian Ianone (LabGov) recommends managing the city as a “collaborative common”, which he calls the “co-city.” Instead of the traditional public-private partnership, which often transfers public money into private hands, Ianone suggests a public-private-citizen partnership model that builds physical, digital and institutional p2p platforms – to promote “living together” (collaborative services), “growing together” (co-ventures) and “producing together “(co-production) .This would be done from collaborative/polycentric governance with the inclusion of five actors (what he calls the “five-fold helix”): public administrations, knowledge centres, companies, civil society organisations and social innovators.

What do we have and what do we lack?

As shown by the P2Pvalue project directory, there are currently about 1,000 collaborative and communal management projects in Catalonia, which reveals that Barcelona is already an international reference in the field. For examples, in relation to telecommunications networks, Guifi.net has more than 30,000 buildings connected in a community network and The Things Network is a new wireless community network connecting sensors. As for physical products, there are initiatives such as Fablabs, Ateneus de Fabricació and other self-managed manufacturing spaces. Barcelona also has a wide range of free software communities (such as Caliu, Softcatalà, KDE, Ubuntu.cat) and free technologies (Arduino or Raspberry Pi).

Some of these initiatives are promoted by the City Council. Within the Municipal Institute of Information Technologies, the Department of the Knowledge Society is responsible for the relationship with the educational and free technologies communities. In Barcelona Activa there is growing interest in promoting free technologies to increase the competitiveness of companies. The City Council has created a Network of Ateneus de Fabricació, which represents one of the first public digital manufacture laboratories of in Europe. The Barcelona Education Consortium is developing initiatives for the technological empowerment of students, often in collaboration with the Network of Ateneus. The Public Health Agency has a network of sensors distributed throughout the city. The City has an open data portal in order to foster transparent social innovation. Urbanists are working on the ‘super-blocks’ plan, not only from the perspective of mobility and participation but also shared use of electricity, fibre optics, electric vehicle charging points and solar self-production. The Urban Mobility Plan aims to promote the electric vehicle and car-sharing, which gives potential to self-managed and cooperative platforms.

But there is still a long way to go. On the one hand, communities are fragmented and fragile. Projects are not always sustainable and many have to close. They could become a model for economic development if there were policies that supported them and gave them visibility. On the other hand, although the City Council is shifting its direction, it does not always have a well-planned, consistent position in this area. For example, digital literacy programmes continue to exclude open-source alternatives, thus reproducing the privatised model of the Knowledge Society. In general terms, both within and outside the administration, critical thinking and ICT and common knowledge are needed.

How to generate what we lack?

Part I of the report analyses the main issues, objectives, actors involved and actions to be developed in the area of software, community telecommunications networks, physical products, collaborative consumption and commerce, energy and mobility. Part II includes an inventory of the actors involved, an evaluation of the main municipal programmes in these areas and a list of municipal communication channels in the area of new technologies as well as the main activities in the city, for example, Mobile World Congress or Smart City Expo, but also activities of the communities themselves. 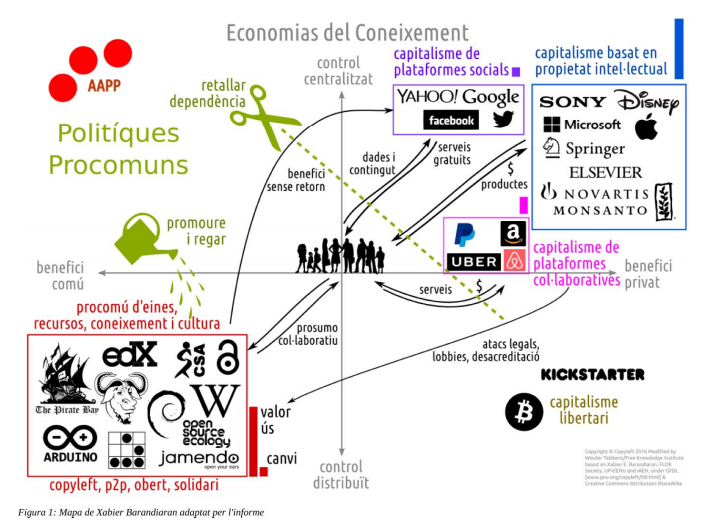 The analysis is based on the conceptual model proposed by Michel Bauwens and Xabier Barandiaran (see Figure 1. Adapted map by X.Barandiaran). The starting point is that knowledge economies can be developed under centralised or distributed control (vertical axis) and for common or private benefit (horizontal axis). The dominant model is characterised by centralised control for private benefit (upper right). Recently, the dominant model has been diversified from the traditional capitalist model based on intellectual property (e.g. Sony, Disney, Microsoft) into a model of social network capitalism (e.g. Google, Facebook) or collaborative platform capitalism (e.g. Airbnb, Uber).

The opposite side of the box (bottom left) represents the model based on distributed control and common benefit. This shows commons communities, which have been developing a set of free and open tools, resources, methods, knowledge and culture. Centralised control for the common good (upper left) basically refers to administrations and public policies. On the opposite side (lower right) is a model that could be defined as libertarian capitalism, with distributed control but private benefits (e.g. Bitcoin, Kickstarter).

The report maps the main actors working under the distributed control model for the common good (bottom left) and evaluates the main public institutions and programmes promoting centralised forms of the common good.

The Executive Report summarises the main issues and actions proposed in each of the areas analysed is available online.